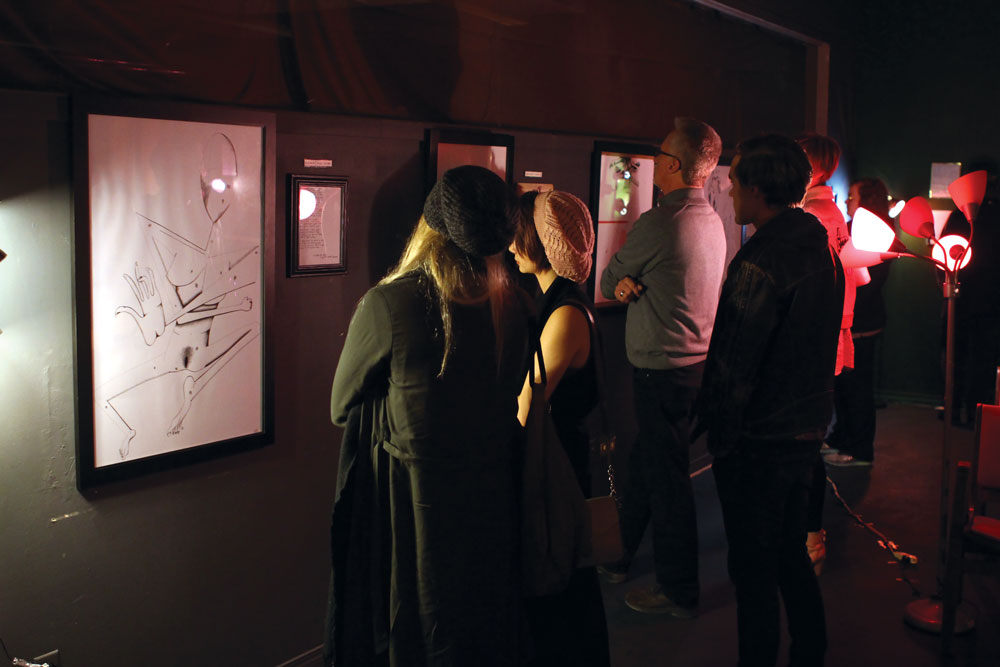 Gallery blends mixed media and music, promotes “feminine experience of the self”

Each visual piece was presented next to the lyrics of it’s musical counterpart for people to experience before the live performance at the Rudolf Rocker on Friday, October 14. THE PROJECTOR/ Jen Doerksen 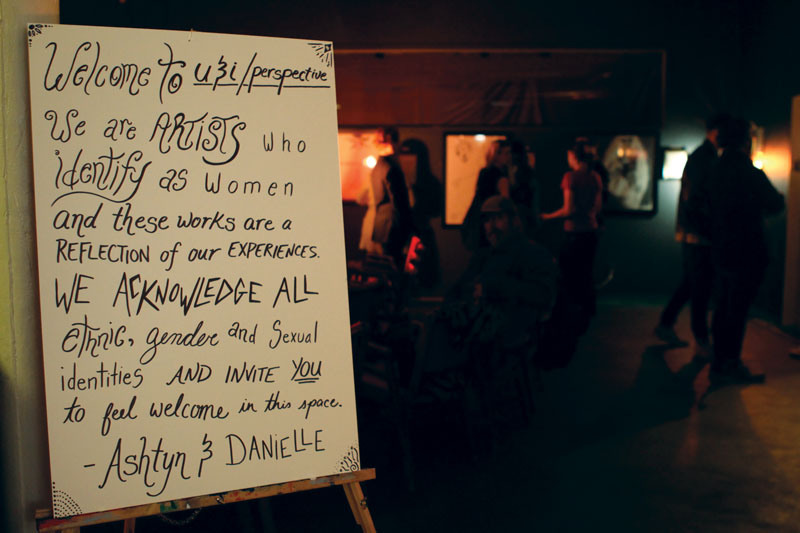 Walker and Friesen purposefully created a safe space for sharing vulnerable experiences with a public audience. THE PROJECTOR/ Jen Doerksen

What started with a candlelit dinner of beer and pizza quickly became a collaborative expression of feminine experience.

“We both got together, not expecting any of this,” said Danielle Friesen, the visual artist.

Ashtyn Walker, the musician, invited Friesen to her new apartment in June. When they arrived, the lights wouldn’t turn on. So they went to Walmart and bought candles.

“We ended up having an evening of candlelight and pizza and beer, then all of a sudden we simultaneously had this thought,” said Friesen.

Friesen and Walker created 12 artworks around the “feminine experience of the self and the collective.” Each piece consisted of a song written and performed by Walker, alongside a painting, sculpture or other mixed media work by Friesen. 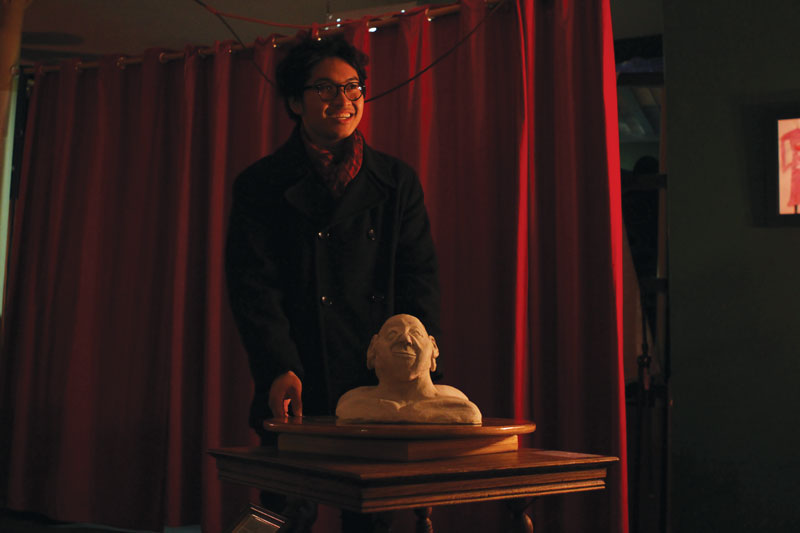 Garvey Regis spins the sculpture pieces, “second-last straw,” two heads facing away from each other with different expressions on each. THE PROJECTOR/ Jen Doerksen

Together, Friesen and Walker explored topics like virginity, sexual assault, hairy armpits, menstrual cycles, bonding with women and a mother’s embrace without hesitation.

“Sometimes when I look at pieces, I can’t even look at them for too long because I’m like ‘Holy Toledo, totally went through that once,’” said Friesen. “Or like ‘I want to look at this piece because it brings back good memories.’”

“It’s a very tender subject most of the time and people tend to pussy foot around it. And they don’t,” said attendee Sharon Mccullough.

Friesen and Walker started the project on June 28. They wrote each song, created each artwork, and planned and promoted their gallery within three months.

“It never escaped our thoughts,” Friesen said. “A lot of times, even when you’re not physically working on a project, you’re always thinking about it. It felt like we never stopped.”

Walker said she worked on the project non-stop while being a full-time student and working three jobs.

The gallery approaches hot-button issues in feminism, and Walker said since many women have these experiences, they can be difficult to talk about. 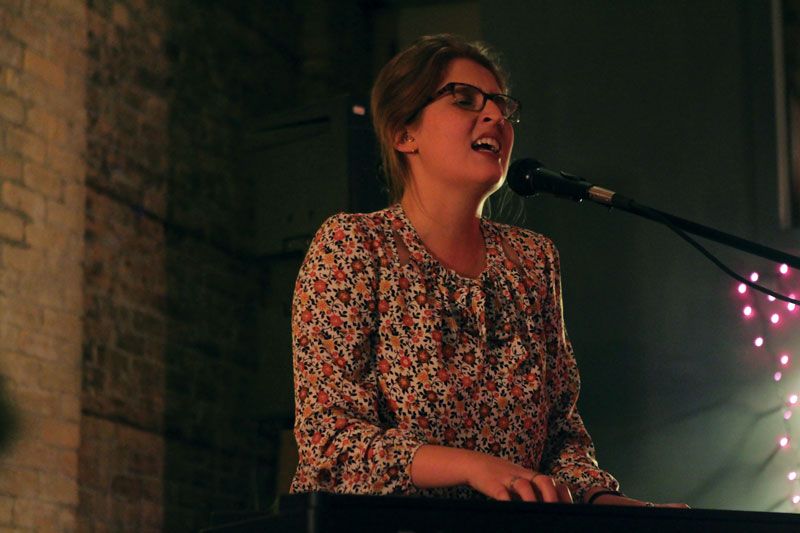 Ashtyn Walker sings about the piece “no means no”, saying “you know exactly how you’re supposed to feel. And you know it’s not awesome.” THE PROJECTOR/ Jen Doerksen

“When you’re expressing feelings under that theme, there will always be varying opinions,” she said. “This was a way to express things fully, openly in a way I didn’t have to think that others might feel alternatively.”

“There were times when it gets very overwhelming and you need to walk away. Because, like Ashtyn said, it’s honest. It’s real. It’s the truth,” said Friesen.

The audience represented both gender binaries almost evenly. Everyone lauded each performance and responded throughout each song with laughter, sighs and silence where appropriate.

Garvey Regis said the gallery shed light on a few things for him.

“I’ve never thought of much of this as a problem because I’m a dude,” Regis said. “But the more you listen to Ashtyn or Danielle talk about this, and the more you look at the art, it opens something up for yourself.”

Walker and Friesen added that they were surprised with the large turnout.

The audience rewarded each song with loud applause. People filled the chairs and any space between the back row and the back wall. People in their 20’s sat in front of the chairs.

Both artists said the project was a deep learning experience about each other.

“I realized, for example, in some of Ashtyn’s music there’s growth. You’re going through a story and there’s this pull of strength in it,” said Friesen. “In times where I felt that way, I can say ‘Hey Ashtyn felt this way!’ and there’s hope.”

The gallery was a one-time event that took place in the Rudolf Rocker on Albert Street. Walker said they’re considering hosting it again because it went so well. 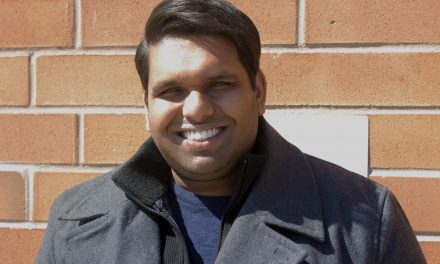