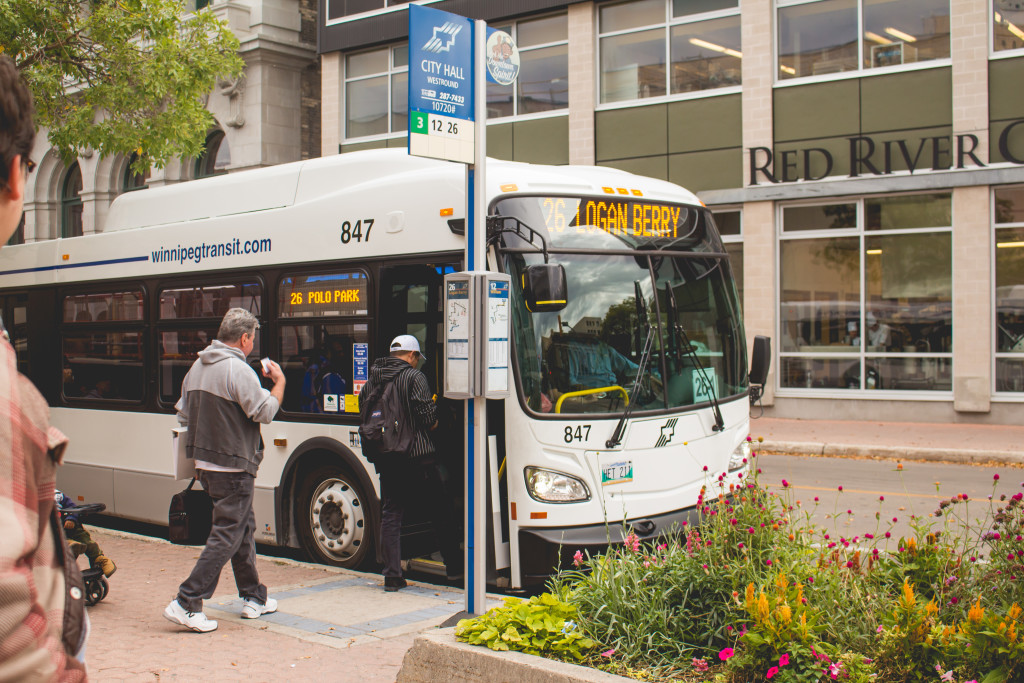 A bus pulls up by Paterson GlobalFoods Institute. Opinions on bus safety seem to differ with RRC students. THE PROJECTOR/Erin DeBooy

As Tannis Miller watched a 16-inch butcher knife fall onto the sidewalk, her sense of security was shattered. When police threw a man who was carrying the blade from the bus, Miller said it was a dose of reality.

“I was just so naïve about it,” Miller said. “I’d heard about dangers downtown and such, but I never really thought about it.”

It was almost a year ago that Miller was catching the 14 at a busy stop downtown during rush hour. She said as she waited, a man in the bus shack started to harass her.

“It started out with him muttering things and yelling here and there. Then all of a sudden he got up and was shuffling around, yelling at me to give him my phone,” Miller said. “I left the bus shack and an older woman who was watching us said he had a knife.”

When the man got on the same bus as Miller, someone notified the bus driver about the knife. The driver then called the police. Miller said she was terrified the man was going to realize what was going on before the police would show up.

Police arresting a man who allegedly brought a butcher knife onto a transit bus. SUPPLIED/Tannis Miller

Miller’s example is an extreme one, but with bus drivers reporting 225 assaults in the last four years, according to a Sept. 13 article in Winnipeg Free Press, some students said they don’t feel safe on their daily commute.

“I take the 16 so it goes from the suburbs all the way to the north end,” said RRC student Huma Arain. “I’ve seen a lot of drunk people on the bus, people passed out on the bus…the bus drivers don’t do anything. I don’t feel safer with them there, I don’t think they care.”

Fellow RRC student Corrina Bollegraf has also had experiences on Route 16 that have made her feel uncomfortable.

“Just last week I was on the bus and the bus driver got in a yelling match with this girl,” Bollegraf said. “That’s not safe, that doesn’t make me feel safe.”

All transit busses are equipped with surveillance cameras and automatic vehicle location technology to help deter criminal activity, according to an email a City of Winnipeg spokesperson. They continue to look into new security methods and technology as it becomes available.

For some students, these security measures are enough.

“I’ve never had any issues,” said RRC business administration student Kayla Legace, who takes a bus on the 18 route. “The bus drivers are nice. They help people on the route if they ask for help or if they don’t know where their stop is.”

For Miller, the cameras that were recording the situation didn’t put her at ease.

“I kept thinking, what if he comes at me?” she said. “The police were there in less than two minutes, but it was the longest two minutes ever.”

John Callahan, president of Amalgamated Transit Union Local 1505 told the Winnipeg Free Press he would like to see plainclothes police officers riding the bus regularly. This would ensure the safety of drivers and riders alike, he said.

“I think that would be a great idea,” Miller said. “I’m more cautious now, a little jumpier and paranoid when I’m bussing. [Plainclothes police] would make me feel much safer.”