The Rebels women’s basketball team has won the Manitoba College’s Athletic Conference (MCAC) for the past five seasons, but this year they have a new goal—to have fun.

“In the last few years we’ve had pressure to win it all and it’s taken away from a little bit of the fun, and this year we’re putting fun first,” said head coach Jaenas Pangilinan. Pangilinan has coached the women’s basketball team at Red River College for the last five years. 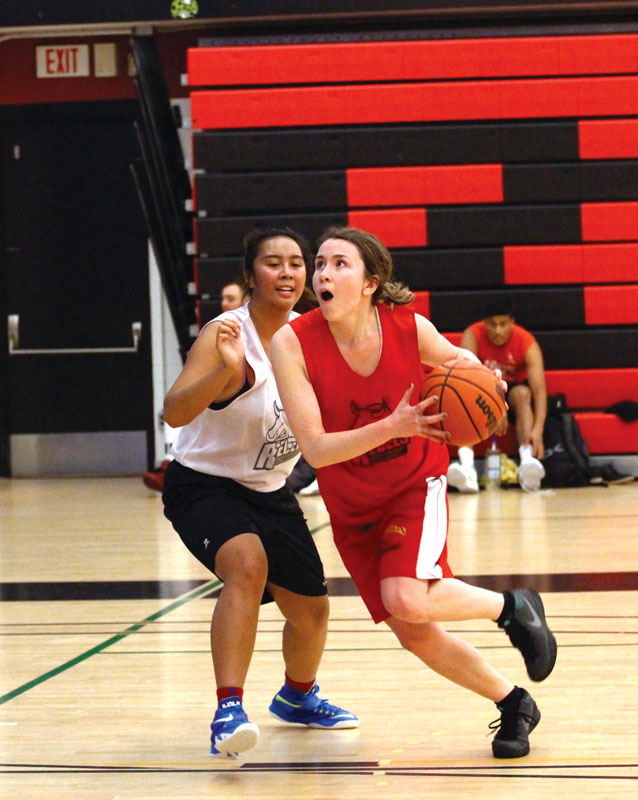 Another one of Pangilinan’s goals is to field a full roster. He said players rarely stick around for more than a few years.

“A lot of the courses at Red River don’t take more than two years to complete so the team is always changing. Every year is a new team. It’s exciting,” he said.

This year the team has five new players. Pangilinan says he is excited about all of his players’ potential, but he’s especially glad to have second-year forward Brita Enns-Ketucy returning.

“She’s gotten a lot better, and she’s a really good student. It’s always exciting when a student athlete does her school work first and is also a good athlete,” he said.

He is also excited to have Zera Lynn Panesa back. Panesa had been playing for the Rebels for three years, but took last season off. She hopes the team can pull off its sixth MCAC title.

“My personal goal for the season would be to win MVP,” she said.

For now, Pangilinan wants to get a team together and get them into a position where they feel comfortable.

“Our goals and focus change as the season goes. It’s all dependent on where we are at that time, how the athletes are feeling,” he said.

But the streak that’s on the line still affects the team.

“The pressure is there to try and win your sixth one. No one wants to be the first team who didn’t win. This year, our focus is not that, but I know that the players put that pressure on themselves,” said Pangilinan.

Although the season is already underway, the team is still welcoming players. Those interested can contact Shane Ray, RRC’s manager of athletic and recreation services at shray@rrc. ca. The team’s first home game is set for Nov. 22 at 6:00 p.m. at the Notre Dame Campus against the Providence Pilots.