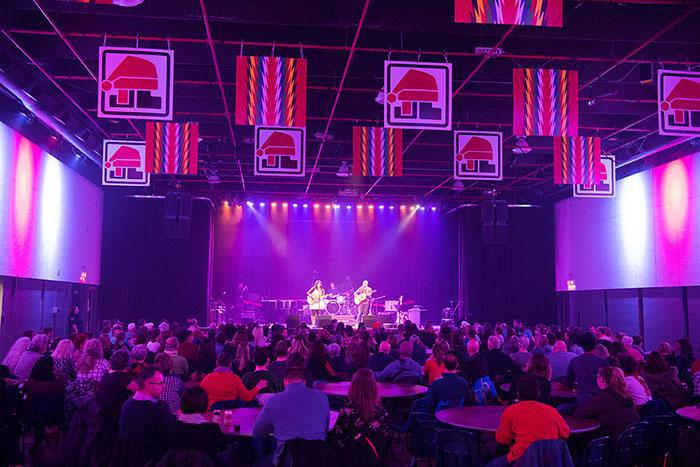 Festival du Voyageur is Winnipeg’s biggest French-Canadian celebration and it has no shortage of activities: a pea soup competition, a beard-growing contest, snow sculptures, maple taffy on snow (one of my personal favourites), and some amazing musical acts. Here’s a small selection of some performances to look out for during the festival.

Royal Canoe, the indie-pop band from Winnipeg and Steinbach, is truly embracing Winnipeg’s winter this year, first with their ice instruments performance at The Forks, and now Festival du Voyageur.

In their most recent release, Waver, the band tries something new by playing on the absurdity of modern life.

Sierra Noble is known for her iconic song “Possibilities,” but she has a pretty impressive resume beyond that. The Winnipegger was 13 years old when she released her first record, a traditional Metis fiddle album. Since then, she’s performed at the Opening Ceremonies for the 2010 Winter Olympics and has opened for performers such as Paul McCartney, Kid Rock, and Bon Jovi.

Metis jigging group Kadanse will be joining Noble and her band on stage.

Boniface, an indie-pop solo artist from, you guessed it, St. Boniface, burst onto the music scene with their release of “I Will Not Return as a Tourist” in 2017.

They just wrapped up a European tour last fall, and their debut record “Boniface” will be released on Feb. 14.

Alpha Toshineza is a Winnipeg MC and producer whose music combines hip hop, spirituality, style, and poetry. For his final concert at Festival du Voyageur, he’ll be joined by a live band to make the performance even more memorable.

With a name that sounds very familiar to one of the biggest pop singers in the world right now, you know Billie Irish is going to put on a great show. This Celtic rock band from Winnipeg’s set is rooted in Irish and Newfoundland music, which always makes for a good time.

Experience a dance party like never before with Full Blüm DJs’ set. With influences of ethnic, world rhythms and folk music, paired with the Winnipeg DJs’ positive vibes, it’s sure to be a great night.

Festival du Voyageur runs from Feb. 14 to 23, 2020. For tickets, a complete list of artists, and more information, check out https://heho.ca/en/.