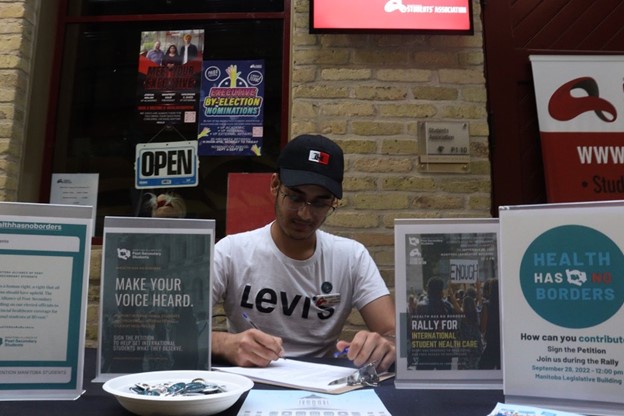 The Manitoba Alliance of Post-Secondary Students (MAPSS) has hit the ground running on their Health Has No Borders proposal, advocating for accessible health care for international students in Manitoba.

Both the Red River College Students’ Association (RRCSA) and the University of Manitoba Students’ Union created MAPSS and the proposal. This is the second time they are advocating together about the issue.

RRCSA president, Manpreet Kaur, and vice president external affairs, Harjinder Singh Dhesi, are both international students themselves. They have been organizing how the proposal and corresponding petition are presented to RRC Polytech students.

Singh Dhesi and Kaur both said they disagree with the government’s decision, adding that the money saved from the restriction does not come close to what international students provide to the province.

“We are bringing more than $400 million to the economy, and the government is not providing us health care, which is the basic necessity of everyone,” said Kaur.

Singh Dhesi said the government showing their support for the students and post-secondary institutions will also help bring out a more diverse student body.

“There are students from more than 100 countries coming here. So if they are contributing, if they are giving so much to us, we should actually be giving back to them as well,” he said.

Other international students have expressed their frustration.

“I think that whenever you’re feeling sick your first thought it’s to go see a doctor. It’s sort of a no-brainer, right?,” wrote Lilliam Norori Duarte, a student at RRC Polytech, in an email. “However, that’s not the case, at least for me.”

“No one should feel like they don’t belong because of their nationality,” she added.

MAPSS is organizing a rally on Sept. 28, at The University of Winnipeg and the Manitoba Legislative Building. It starts at noon.

“Not only students, everyone in support can join the rally,” said Kaur. “Many citizens are there, and they are also supporting us, so we would love them to join.” Singh Dhesi said RRC Polytech students are encouraged to sign the petition available at the students’ association offices, located at both the Exchange District and Notre Dame campuses.

Remote for the fall