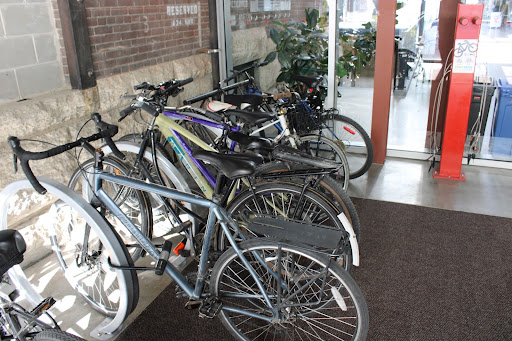 30 bike lockers at Manitou a bi Bii daziigae building not enough for cyclists looking to secure their bike: students

Students at Red River College Polytechnic have access to 30 brand new bike lockers with personal storage and privacy, but some students say they were not well informed about them.

These new bike lockers inside the new Manitou a bi Bii daziigae building were all claimed earlier this school year. The older buildings on the Exchange District Campus don’t have the same amenities, meaning the new lockers were first come first serve.

For students who didn’t get a locker, they can lock up their bikes at the entrances to the Princess Street campus or at other bike racks downtown.

Jordan Bowley, an Electrical Engineering Technology student at RRC Polytech, bikes to school every day and has a hard time finding a place he feels comfortable enough to lock his bike up. “I’ve had people take stuff off of my bike before, so I’m kind of worried,” said Bowley.

Bowley said he has been locking his bike in the Princess Street building’s entrances, where anyone can walk in, and anyone can lock up. Because the space is limited, students like Bowley are forced to find different bike racks or make other arrangements.

“It’s been so packed, even at the Paterson GlobalFoods Building,” Bowley said.

The Red River College Paterson GlobalFoods Institute is down the street from the Princess Street campus.

Some days Bowley said he isn’t able to lock up in the same building because it’s full, so he has to get creative with locking up.

“Sometimes I’ve had to lock my bike up awkwardly to get it to fit,” he said.

Oskar Sawatzky, a Digital Media Design student at RRC Polytech, has also been locking his bike at the entrance of the Princess Street campus and has had trouble finding room to fit his bike.

“If you come in here in the morning around 10, there are barely enough spots,” Sawatzky said.

Sawatzky is enjoying the convenience of the racks at the entrance but didn’t know about the new lockers in the Elgin building.

“I had no clue,” Sawatzky said. “I just brought mine in the other building and started going here.”

Sawatzky said more new lockers would make things less crowded and should be for everyone to use.