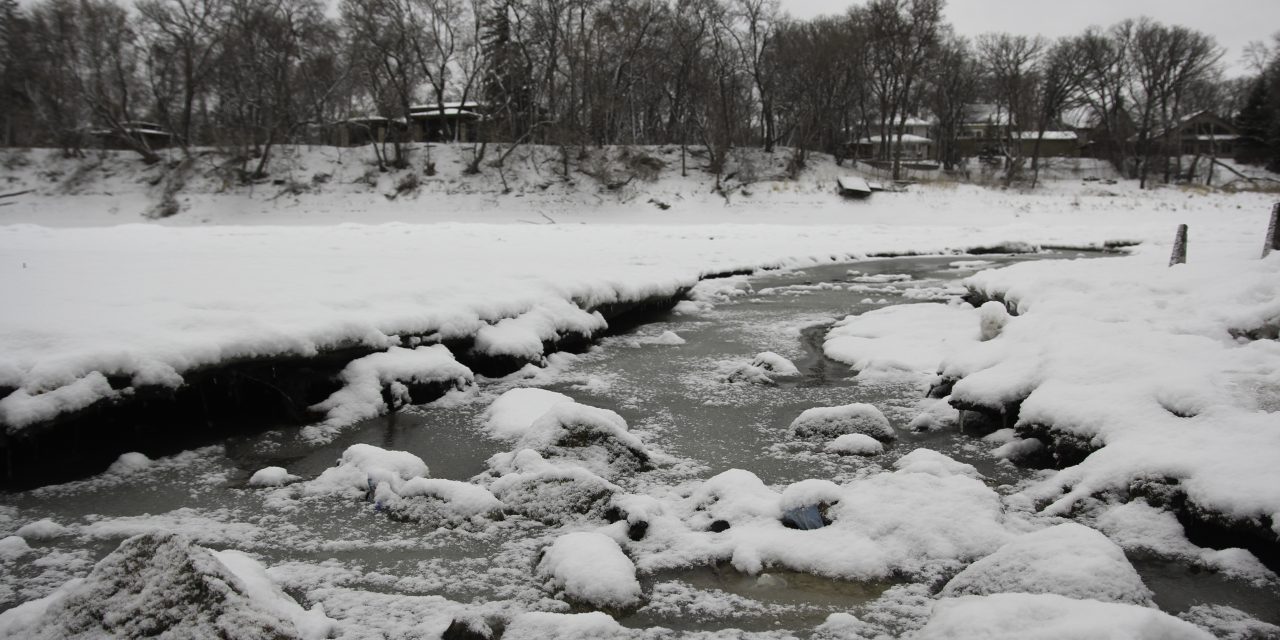 Two young women help each other maneuver across a sludge-filled gulley dissecting the river ice near a Wolseley river trail.

The serpentine trails of sewage carved into the waterway were, for many, their first exposure to the cocktail of human waste, run-off that spew from large culverts. This particular outlet is one of 76 overflow outlets across the city.

“It’s a call to action if there ever was one. I think, sometimes, for change to happen, is there has to be some kind of crisis that gets public attention,” said Marianne Cirelli, chair of the Wolseley Residents’ Association. “Winnipeggers really don’t understand how our city water and waste system works.”

At the end of February, water from a quick melt pooled in storm drains across the city. Full drains cause backups. To prevent this, the combined sewer system triggers a mechanism that releases the water—along with untreated sewage—into the river.

Without notice, the effluent wiped out ski trails and skating paths, cutting the season short for neighbours who built the public space and Winnipeggers passing through.

Hanna Henriksson-Rebizant skied on the Red River for the first time this year. The 24-year-old environmental designer said she’s disgusted by the sewage on the ice and has known about the problem for years.

“I understand it more as a flaw in the system. What’s designed to happen is happening,” Henriksson-Rebizant said.

However, she said she was shocked to learn that plastics sometimes flushed down the toilet, like condoms and tampon applicators, end up in the river by way of the overflow.

A pumphouse disguised as a mid-century modern bungalow sits at the top of the embankment near the exit pipe. Some Wolseley residents have nicknamed it the “stink house.”

“I think we’re being really bad ancestors,” Cirelli said. “If we don’t do anything, it’s going to be another few decades where we’re dumping sewage in the river. We’re leaving this cleanup to our kids and our grandkids, and we’re pushing all those costs down the road to them.”

Daniel Gladu Kanu, the director of Lake Winnipeg Indigenous Collective, lives near the river and is familiar with the city’s waste management system. Yet, he almost didn’t believe the sewage stream could be real. He had to see it for himself.

“It’s one thing to read a stat, but it’s another to actually see it in person,” he said.

The discharge ends up in Lake Winnipeg by way of the Red River.

Many people living near the lake are palpably frustrated about having their water used, more or less like a toilet, Kanu said, adding that these communities used to drink water right from Lake Winnipeg.

The phosphorous in the excrement feeds into the lake’s algae bloom crisis, killing wildlife and uprooting the fishing and tourism industry.

Kanu said each government level has a role to play in managing the city’s sewage and that he would like the federal government to do more to support daunting capital projects like the North Main Sewage Treatment Plant Upgrade.

Climate change will exacerbate the combined sewage overflow problem, Cirelli said. Severe weather events and rapid freezes and thaws push pipes and pumps to their limit and do so with increasing frequency.

As the last of the snow melts and the Red River’s caramel waters swell below the surface, the combined sewer pipes outlets will continue to do what they were designed to do, just out of sight.