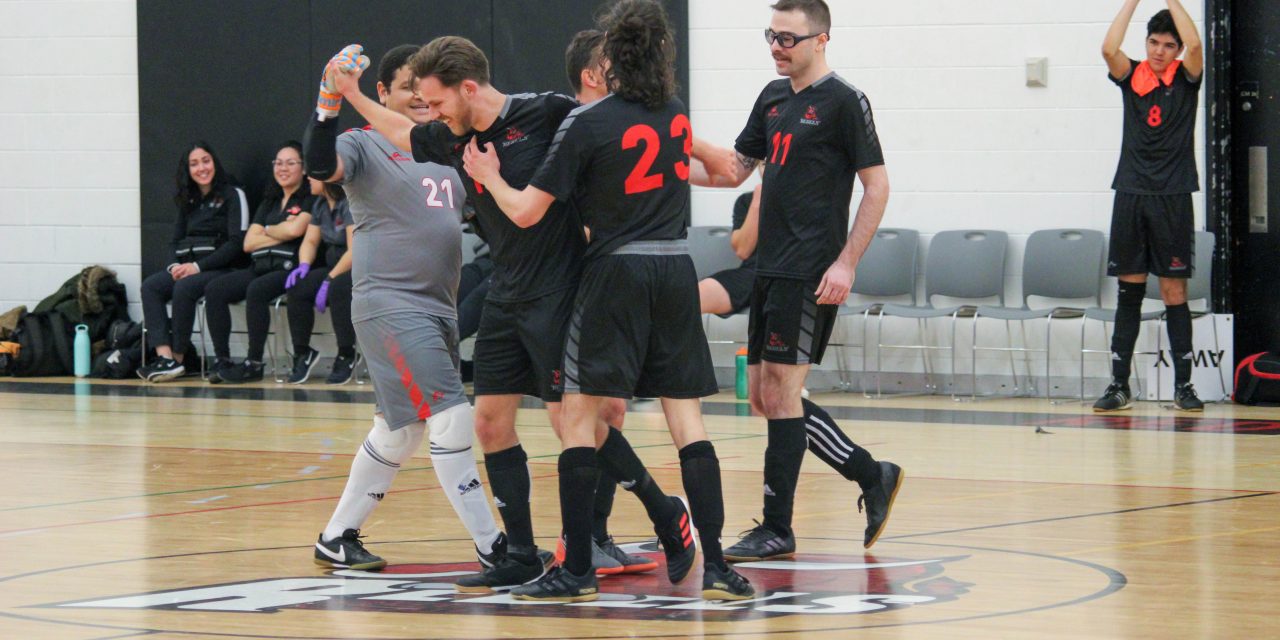 “I mean it was a little improvisation, but I’ve done a few before,” said Racicot postgame. “Not in a futsal game, but it was a little bit of luck and it was a good ball, a good cross from Eddy (Eduardo Francisco).”

The match paused for a brief moment to admire the rare highlight-reel goal.

“It felt unreal,” said Racicot. “The fans gave a pretty good applause so that felt good.”

CMU jumped out to an early 2-0 lead after goals from Victor Hugo and Will Anderson.

Racicot got the home side on the board with 9:35 left in the first half, but it was Bailey Mulhall’s takeaway and shot that did all the work — the ball redirected off Racicot’s side and in the net.

Aidan Beckingham added to CMU’s lead on a converted penalty kick, and Ryan Jensen made it 4-1 on a one-timer lasered to the top corner of the net.

Racicot’s bicycle kick opened up the scoring in the second half, giving the Rebels momentum.

“He’s a talented player and I’m glad that he got one in,” said RRC head coach Chuck Mrena. “He’s a nice weapon to have and a great guy — he’s just having fun.”

“I think we put a little scare in them at the end because we did get three late chances,” said Mrena.

Beckingham gave CMU some breathing room when he slid in the ball under RRC keeper Marcos Bremgartner to make it 5-3. Beckingham went on to complete the hat-trick on a backdoor tap-in with less than three minutes remaining.

RRC will welcome the Assiniboine Community College Cougars (ACC) next Saturday at 11:15 a.m. at the Notre Dame Campus.

After Jessica Gzebb made it 5-2 for RRC over the CMU Blazers with 54 seconds left in the match, the following words could be heard in the bleachers: “do you believe in miracles?”

The marker was Gzebb’s fourth of the game, fitting that the Rebels had just four players dressed due to injuries and other sports commitments.

The Blazers opened the scoring, but RRC stuck to an energy-preserving plan that head coach Doug Lawrie said his team “executed perfectly.”

“The intent was to get Jessica (Gzebb) the goal scoring opportunities with long plays up to her in the attacking half and she capitalized on four of them.”

Gzebb evened things up when she ripped home a ball past the short-side of the CMU keeper.

Her second of the evening came minutes later when Jessica Da Silva sprung a three-on-one rush that finished with Gzebb ringing the ball bar-down to make it 2-1 RRC at 17:55 of the first half.

Then it was full on prevent for the Rebels.

A key moment came at 10:22 of the second half when Da Silva had to briefly exit the match, giving CMU a four-on-three advantage. The Blazers quickly earned a free kick near the Rebels net, but RRC’s Sarah Fontaine absorbed the kick to save a potential goal.

“It was her very first game ever, and she did a tremendous job in a game plan that I had to explain to her ahead of time,” said Lawrie.

After almost 28 scoreless minutes, Gzebb split a CMU defender while on the attack and walked in before firing home her third of the game to make it 3-1 RRC.

The Rebels will face-off with the AAC Cougars for a match next Saturday starting at 1 p.m. at the Notre Dame Campus.