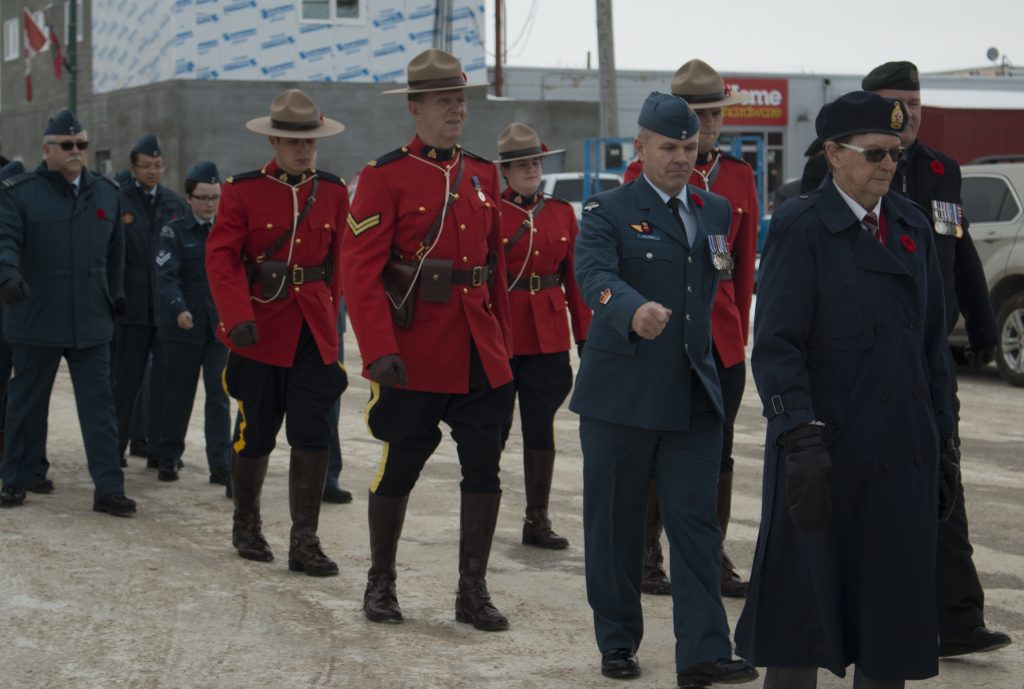 In the town of Swan River, Sara Provencher sits towards the back of the crowd in the War Veterans Community Hall with her mother, Heather Nielsen, and her great-grandmother, Esther McQuarrie. It’s Remembrance Day, and Provencher’s grandfather Captain Alfred Nielsen is a part of the colour party.

Provencher, 21, and Nielsen, 51, agree their family plays a large part in why they choose to attend Remembrance Day ceremonies. Provencher’s great-grandmother was a typist in the Army during the Second World War and her great-grandfather fought in the trenches with the Royal Winnipeg Rifles.

“I’m pretty anti-military and anti-war, and if it wasn’t for my family, I wouldn’t attend at all,” said Provencher, who is a student at The University of Winnipeg.

“See, Remembrance Day for me isn’t about the war. It’s not about military or fighting, but remembering those that lost their lives for us,” said Nielsen. “But, I do have an issue with the United States imposing their will like they do today.”

“It’s imperialism. It’s all it is,” said Provencher.

Provencher says war, in a way, gave a purpose to her great-grandfather. He was only 16-years-old when he enlisted. Esther, 92, says he grew up fast during those years, and for years, he would wake his family up with his screaming. She would have to use a broomstick to rouse him from the nightmares.

“It sort of makes me grin when [a soldier] dies, and the family says how wonderful they were because they were fighting for their country,” said Esther. “But most of these poor buggers were trying to keep themselves alive, never mind the country.”

After the service ended, the family joined Capt. Nielsen for lunch at the Legion.