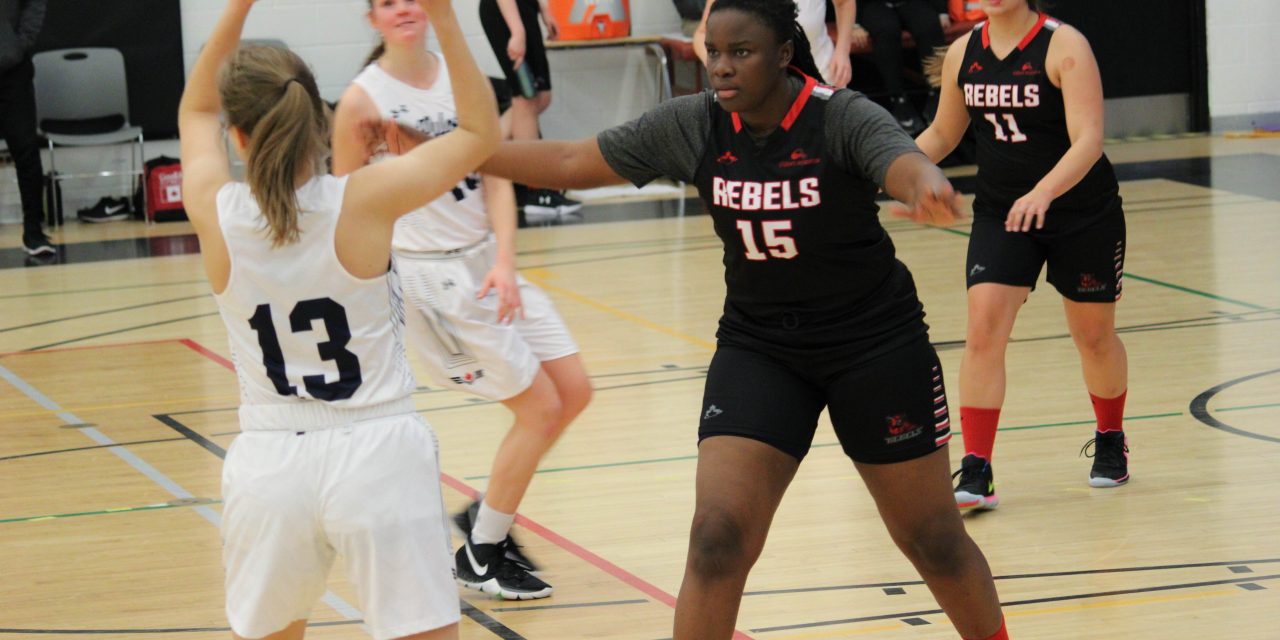 The Rebels’ starters and bench split their scoring totals in half on Friday in RRC’s 100-80 win over the visiting Providence University College Pilots.

Pilots forward Jordan Lawson was the story of the game, netting 52 points on nine threes and 37 shots from the field. The 52 points is a MCAC single-game record according to Stat Trackers.

Leading the way for the Rebels was Trezon Morcilla with 20 points after connecting on five of seven three-point shots. Justin De Leon had another efficient game off the bench, contributing 13 points, two assists and two steals.

“I was happy with my overall game as the sixth man today,” said De Leon. “We just got to figure out a way to stop Lawson.”

RRC head coach Scott Kirkpatrick felt the same way, saying it’s tough to stop a player who continues to score even when they everyone knows he’s shooting the ball.

“Tomorrow we might show him a few more defenders, and we got to watch those corner threes that we watched prior to tonight on tape,” said Kirkpatrick.

Returnees Mark Ridd, Torrez McKoy, and Scott Williamson all made their season debuts for RRC. All three started Friday, bolstering the Rebels’ roster.

RRC was fantastic beyond the three-point arc, connecting on 13 of 23 attempts. They also made their free throws count, hitting 11 of 13. A 54.3 field goal percentage didn’t hurt either.

Backup guard Andrei Sansano went down with a gruesome ankle injury late in the second, but the Rebels fought through the loss and took a six-point lead at the half.

“He’s a big part of our team and depth,” said Kirkpatrick. “He’s started games for us and has always been involved as a hard-worker and great teammate, so hopefully we see him back soon.”

With the game out of hand, the Rebels starters took most of the fourth quarter off, but that didn’t stop the party from beyond the arc and Frankie Tocci from nearly throwing down an alley-oop.

The Rebels improve to 3-0 with the win, while the Pilots open their season with a loss.

The Rebels women’s basketball team erupted for eight points in the final minute of play, defeating the PUC Pilots 67-63 at the RRC Notre Dame Campus.

The win improved RRC’s record to 3-0, two wins short of their total from all of last season.

Forward Jodene Kowalchuk was dominate for RRC at both ends of the court, racking up a double-double with a game-high 22 points along with 13 rebounds and three assists. Kowalchuk didn’t come off the court once in the game.

Kowalchuk drilled the game-winning three with just over 20 seconds remaining, breaking the 63-63 tie. Kowalchuk’s dagger came seconds after Rebels’ point guard Alexis Garcia connected on a three plus the foul.

“The ball bounced our way and Jodene hit the three, we had to battle all the way for the win,” said Pangilinan.

The Rebels shot just 27.3 per cent from the field, compared to the Pilots 45.6 per cent.

RRC made up for it on the boards, collecting 59 rebounds compared to PUC’s 46. Rebels centreElsie Ruth Nantale owned the paint with 17 rebounds.

Unsung heroes like Nantale played a big role on a night where some of RRC’s scorers were off.

The Rebels already had 10 bench points at the half, mainly from shooting guard Hiroka Kawaguchi who went two of four from behind the three-point line after 20 minutes. RRC finished the game with 15 bench points.

The Pilots held a lead for most of the game, including a 63-57 advantage before RRC’s 10-0 run to win the game.

The Rebels and Pilots finish theirhome-and-home weekend series tomorrow. The women tip-off at 6 p.m. and the men follow at 8 p.m. at PUC.