Every piece of art has a story. The lines from each piece bring together a story, but don’t always tell one on their own.

Shouresh Jalili and Cheney Lansard exposed their artistic voices through a show that empowered women. Woman exposes the strength of women through the eyes of men.

Several people took in the carefully thought out art of Jalili and Lansard on Friday, Oct. 7, at the Albert Hub. As people wandered through the gallery, a painting that struck a chord with many was the one depicting the parents of Zeus. 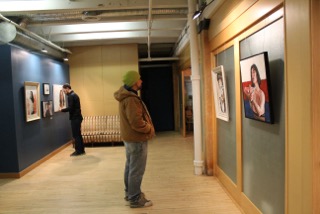 The two men challenged the order, the story and the depth of each of the pieces, as they placed every piece of the show in the spot where it would provide its audience with its strongest story.

Jalili measured and maneuvered every piece of his art. As the crowd filtered in, different women were relating to different stories and pieces.

“You see the room crawling with women you think you know,” said Melissa Burt, as she roamed around the room and looked at pieces with appreciation and understanding.

“You find the people you want to know in every piece, rather than who it really is,” she added.

Woman was a token to the women in the artists’ lives, and to those in the stories Jalili and Lansard told through their art.