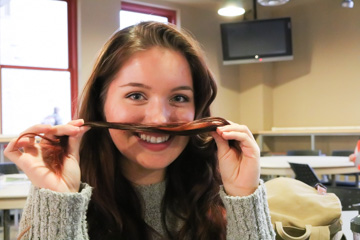 Emily Regehr said she likes Movember’s MOVE Challenge since it encourages people to be active in winter. THE PROJECTOR/Connor Wielgosz

Men across Canada are growing moustaches for Movember, a month-long campaign to raise awareness and money for men’s health initiatives.

But besides supporting men as their ‘staches grow, there aren’t many ways for women to take part in Movember.

“It’s so directed at guys right now,” said Adria Warren, a third-year graphic design student at RRC. “I think starting something new is a good idea.”

Warren said she likes the moustache campaign, but she thinks Movember’s MOVE Challenge is much more open to women and people who can’t or don’t want to grow facial hair.

The MOVE Challenge is simple: participants pledge to move every day in November. Each person can set a fundraising goal and commit to moving every day, whether they run a marathon or just play a game of Ping-Pong.

“I find that lots of guys are just growing moustaches because it’s November, and they don’t really know the meaning of it,” Warren said. “I think actually acting on it with moving every day is a good idea.”

Warren said she probably won’t commit to a full month of fitness, but she might try and move more in the coming weeks.

The Movember Foundation started MOVE because of inactivity, according to their website. The Foundation hopes MOVE will motivate people to be more active, because moving on a regular basis can reduce a person’s risk of heart disease, cancer and diabetes by up to 50 per cent.

“I think it encourages people to be healthy and get active,” said Emily Regehr, a first-year business administration student at RRC. “Since we’re coming up on winter, everyone’s getting lazy. Everyone just wants to cuddle and watch Netflix.”

Regehr said some people may not exercise the whole month, but MOVE can still help people commit to positive change.

“New Year’s has resolutions. Summer is bikini season. This could be the fall version of that,” she said.

The Movember Foundation encourages people to sign up on their site and pledge to MOVE every day this month, just like men growing moustaches can sign up online. Participants who want to raise more than just their number of reps can also donate to or fundraise for the cause throughout the month. 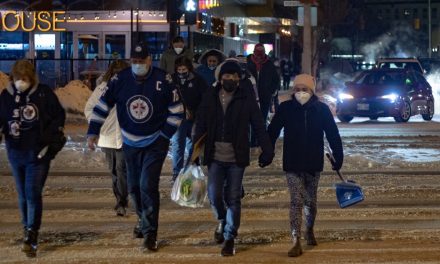