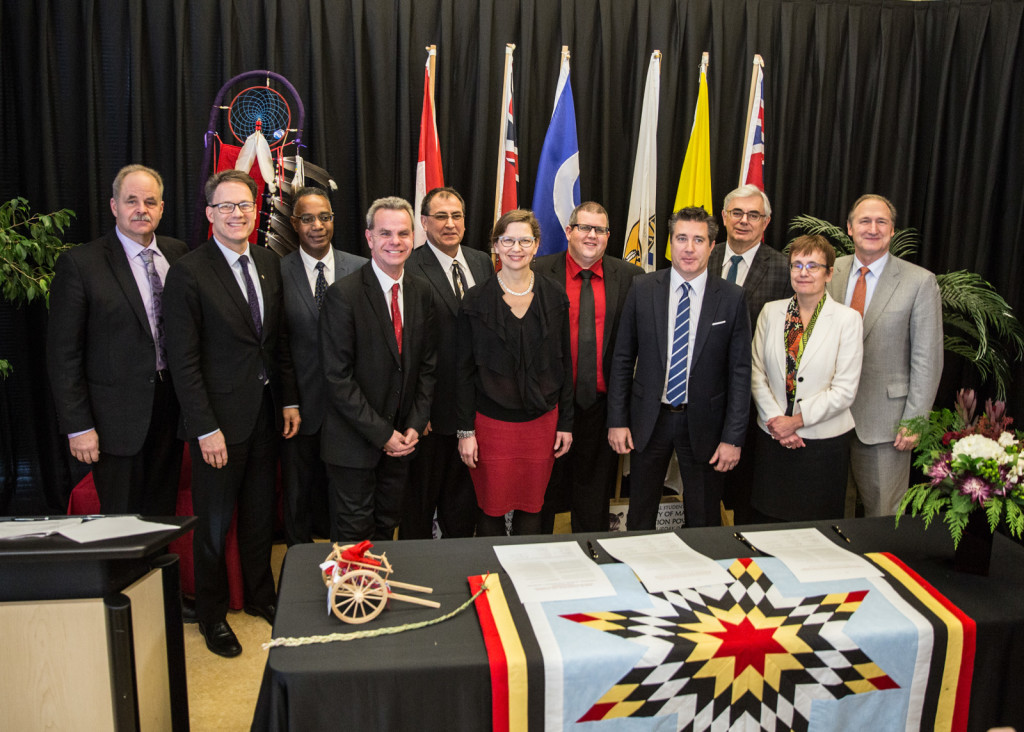 The signatories of the Indigenous Education Blueprint stand together at the University of Manitoba’s Migizii
Agamik Bald Eagle Lodge. SUPPLIED

Province-wide institutions are working together to better indigenous education, and that’s putting a smile on some people’s faces.

“That makes me a proud indigenous Winnipegger,” said Sadie-Phoenix Lavoie, female co-president of the Aboriginal Student Council at The University of Winnipeg. “I know many indigenous people are very excited and thrilled about these indigenizing efforts within education.”

The post-secondary schools and school boards in Manitoba teamed up to act on the Truth and Reconciliation Commission of Canada’s recommendations and signed The Manitoba Collaborative Indigenous Education Blueprint on Dec. 18. The blueprint highlights ten points in indigenous education for the schools to accomplish.

RaeAnn Thibeault, acting vice president of community development at RRC, said this blueprint marks a milestone at the college.

“I think we are at a really exciting time in our history,” she said. “We can embrace what our indigenous communities have asked for for many, many years.”

Lavoie said the blueprint’s goal is to encourage more indigenous students to enroll in and graduate from university or college.

“I understand that there are many factors to why indigenous students face barriers to post-secondary education or to reach graduation,” she told The Projector in an email. “But my hopes are that by advancing indigenous education and breaking down those barriers from an institutional level, it will have an immediate and long-term impact on indigenous students planning to better their lives and communities through education,” Lavoie said.

The blueprint, though still in an early stage, will only be a good thing for indigenous education, said Lavoie.

“The indigenous community has been working for decades to decolonize education for indigenous people, and I believe that those indigenous scholars and academics would be very proud to hear that their efforts and work have been continued and will continue to move forward in a good way,” Lavoie added.

The blueprint commits to bringing indigenous culture and knowledge into the curriculum. The University of Winnipeg has done that by approving a mandatory indigenous course requirement.

Thibeault said RRC already makes indigenous education a priority, but it will take more action to incorporate indigenous cultures and practices into the college.

Lavoie and Thibeault both said the next step for the blueprint signatories is to develop a five-year plan on how they will achieve the document’s ten points. Thibeault said RRC will develop this by the end of 2016.