So, this week I was going to write about the weird relationships students have with teachers where we kind of think we’re friends, but secretly we aren’t. Then I went on this long-winded rant to my boyfriend about each side of the issue, and five minutes in he looked up from his phone and said “Ky, Packers won today. SEMIS, BABY.”

So, now I’m going to write about how stupid he is.

Just kidding, but I am going to write about how little I care about football, strictly out of spite. Based on the fact that I submit these grand pieces of writing to the Sports & Lifestyle section of The Projector, this may be the last time you hear from me. So I’ll try to make it good.

Anyway, football. It’s not the excessive grunting, the violence, or even the fact that we can’t enjoy more than six and a half seconds of a game without a whistle that turns me off — it’s the unfathomable length of the rulebook.

Like most things in life I don’t care about, my disinterest stems from ignorance and, as I mentioned in my last column, my absolute hatred of learning new things. I can appreciate a bunch of muscly dudes in spandex as much as the next basic white chick, but I can’t afford the three years it would take me to learn what constitutes an offside call between the 10 and 20 yard line or just how many coaches one football team needs (seriously, there’s like ten angry guys in headsets on each bench: seems excessive).

Another thing that frustrates me, again, stemming from ignorance, is the seemingly inconsistent nature of the game. Like, one grunter gets a penalty because he only waited two seconds before levelling the quarterback on the other team, then eight football seconds (475 real-life seconds) later someone else does the same thing but doesn’t get a penalty because he started with his left foot instead of his right. How the heck am I supposed to keep track of this nonsense?

The train wreck you just chose to read should be enough proof that I have made next to no effort to understand the madness that is American football, and I can assure you that every day I come home to my boyfriend wearing a piece of foam cheese on his head will be another day I scoff at the sea of yellow and green faces on the TV.

I’m sorry if this offended or frustrated you, sports fans, but I refuse to respect a sport that wastes so much Gatorade. Deal with it. 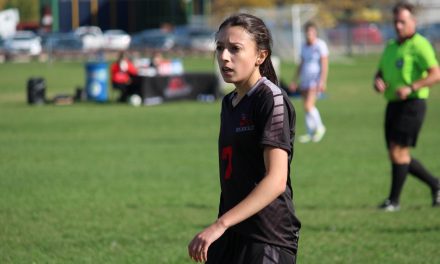