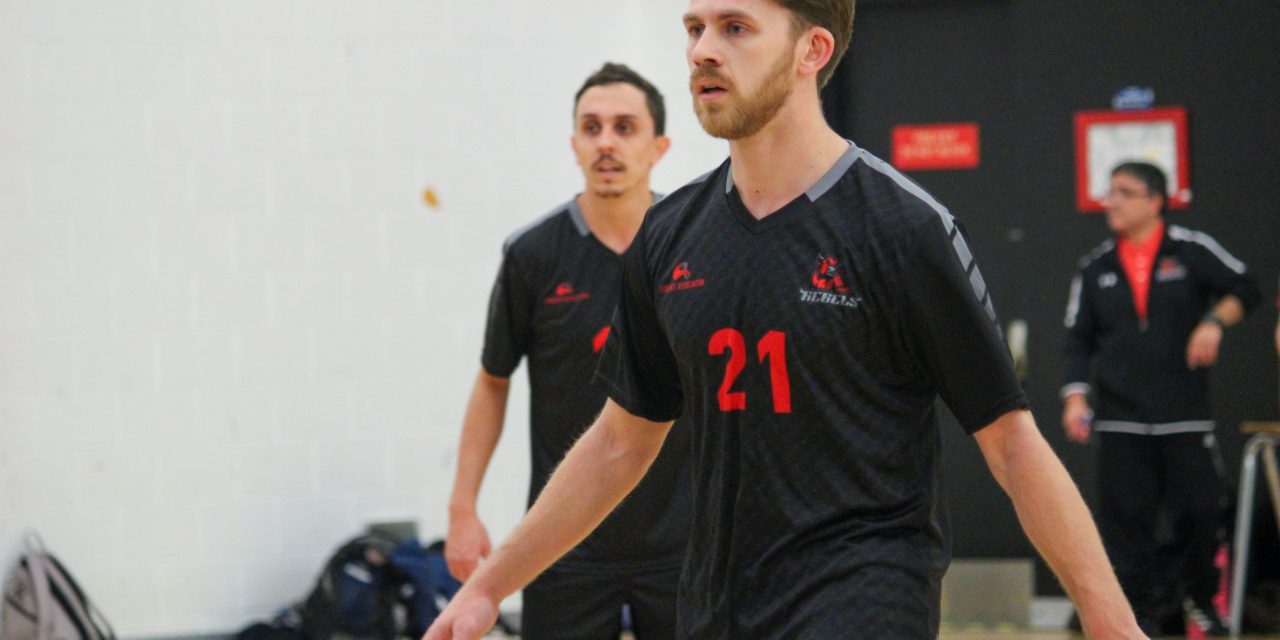 Ahead of his second futsal game with the Red River College Rebels, Devin Racicot was going through his typical pre-game routine: watching inspirational highlights.

Later that night Racicot hammered home a bicycle kick goal in a 6-3 loss to the Canadian Mennonite University Blazers.

If you don’t know what a bicycle kick is, Google it — but try it in a futsal game at your own risk.

“He [Ricardinho] scored a goal identical to that and I kind of just ripped that out of his playbook and attempted it myself and luckily it worked out,” said Racicot, 27.

“It’s always kind of been in my resumé,” said Racicot. “A goal like that…most of it is just improvisation.”

After playing in the Manitoba Major Soccer League (MMSL) for several seasons, Racicot took a major risk by attempting to take his game international.

“I was working full time at a dealership as a customer service rep and there was an ad on the computer that just popped up,” said Racicot.

The ad was for a Pro Soccer Consulting (PSC) showcase tour in Florida. So, Racicot hopped on a plane to Florida to try out in front of Major League Soccer (MLS) and European Premier League (EPL) scouts.

An MCL sprain cut Racicot’s tryout short, but PSC academy asked if he’d be interested in trying out for their club in Latvia. So, you guessed it; Racicot hopped on a plane to Latvia.

“When you’re watching Premier League, you see the ball getting pinged from across the field and you’re just amazed by their first touch,” said Racicot. “To actually see it in-person and play against teams that were able to move the ball so fluently, it was just eye-opening to me.”

After making the team Racicot experienced the country of Latvia, one he’d never been to.

“They have almost a culture where they are very posh, but a lot of their architecture and their buildings are very worn-down” said Racicot. “I loved the city, it was beautiful, like to me in a rustic way it was beautiful.”

The gig was full-time for Racicot, undergoing two training sessions per day followed by games on the weekend, recovery time in between.

During his down time Racicot’s hobby became sight-seeing, hitting up local malls, market stores, an art museum, and really anywhere he could purposely locate, a challenge in itself.

“I remember one night I had to find some cold medicine, and it took me the entire evening just to try and find a pharmacy, not even the cold medicine,” said Racicot.

After a dozen or so matches in Latvia, Racicot was offered a spot on LA Galaxy OC’s semi-professional team, who’d just partnered with PSC. And you know the drill — Racicot hopped on a plane to Southern California to join the club.

“I was playing my best soccer there,” said Racicot. “I didn’t have a job down there, so it was just eat, sleep, and play soccer as my daily routine.”

Nagging injuries soon got the best of Racicot out in California and he later returned home to Selkirk, Manitoba.

“It was still an experience, I wanted to do it for myself to prove I could do it,” said Racicot, who at 25 was one of the older players on the team.

Stepping onto the plane deemed Racicot’s journey a success. Before then, he said he was an introvert who knew his time playing competitive soccer was nearing an end.

“One of my big goals going through my head during the whole process was to kind of bring more exposure to rural areas like Selkirk, even to Winnipeg, even Canada,” said Racicot.

Today, Racicot’s a first-year digital media design student at RRC. Once graduating, Racicot’s got an ambition to work as an audio visual producer or 3D animator.

His studies have also led him to the Rebels’ futsal team.

Through five games, Racicot is tied for the team lead in goals with five.

Racicot’s growing fond of the indoor game of footy.

“You can score three goals in 30 seconds and the game could be completely different,” said Racicot. “The speed of the sport is different, but I love it, it’s the biggest thing I love.”

Although RRC is 1-4 to start the season, they’re only -7 in goal differential, losing close games.

“He’s said it himself, we can beat every team,” said Mrena. “I think that’s one of the things the guys have taken away and said ‘Hey, we actually had them.’”

RRC sits three points back of the playoffs with five games remaining. If they’re going to book a spot in the MCAC championship weekend beginning March 7, Racicot’s presence will play a big role in doing so.

“He’s a real asset, there’s no doubt about it,” said Mrena. 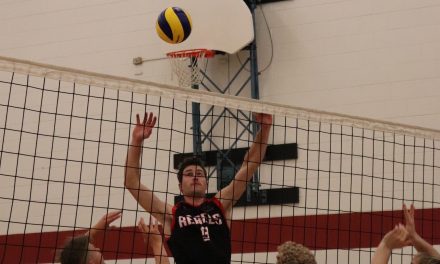