Childcare Is Essential: a coalition, a fact 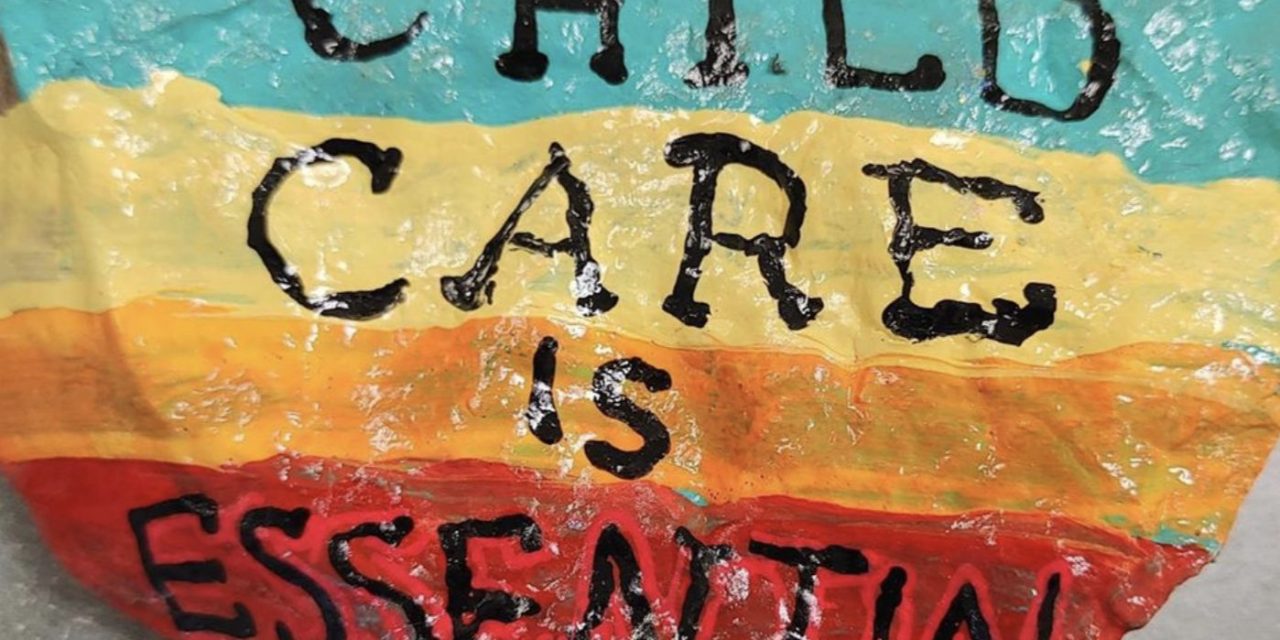 The Pallister government proposed to remove the Enhanced Nursery Grant at the end of July, and a new social justice coalition is banding with other movements and the political opposition to keep it alive.

Kate Rempel, RRC Community Economic Development grad, answers a Zoom call, fumbled briefly with her phone and eventually secured it into the holster on her dash.

“Yeah, I don’t get much free time ‘cause I am always multitasking,” the single mother of one, and former childcare worker said. Her five-year-old sits behind her amidst a loaded back seat.

They had just finished grocery shopping and were headed to the wading pool, then to visit a friend recently out of the hospital, and finally home for dinner.

Rempel said the Montessori school her daughter attended shut down in late March with the spread of COVID-19. She feels fortunate they will hold a spot for her in September when she continues her studies.

Rempel worked with the parent/child coalition in Fort Rouge but said she lost her contract when budget cuts were imposed by the province, and the centre closed its doors.

“That’s where we learn how to be mothers, where our kids make friends – they support all the aspects of early childhood development,” Rempel said.

Laura Burla, executive director of St. James Montessori School, has been criticizing the Provincial Government’s attention to childcare since she discovered a looming audit of childcare services in Manitoba from KPMG—an audit, tax, and advisory service often outsourced by the provincial government.

“Anyone who knows what that firm does, knows they are brought in when massive cuts are coming,” said the RRC grad.

While the results of the audit have not yet been released, the province has proposed amendments to the Childcare Act.

“The results have been withheld so these amendments could slide under the radar now…and, in the Minister of Families own words the government will move ‘To build a legal foundation upon which changes can be made,’” said Burla. “…A slap in the face for someone who dedicates their life to childcare.”

The province’s plan to cut the Enhanced Nursery Grant (ENG) would cause non-profit centres, such as Burla’s, to raise their fees significantly from $5 a day. She said the school already has to fundraise to the tune of $20,000 a year to balance the budget.

“[The Provincial Government] keeps saying they’ve put 16-17 million dollars toward our sector and that’s an outright lie. They keep using these numbers as money spent while it sits in their bank account and not ours,” Burla, a mother of one, said.

At the beginning of July, Childcare Is Essential virtually welcomed a panel of guests to discuss the missteps of the Provincial Government. Susan Prentice, PhD, believes the situation has worsened since speaking at the virtual town hall.

She criticised a provincial pilot project to grant $3,000 to families willing to open their door to parents in need of childcare support. She understands over 99 percent of the $18 million dollar budget for the program is untouched.

“The province has shown a lot of love to home-based care. This government seems to be against centres,” Prentice, mother of two, said. “During [WW2] children in daycares were referred to as eight-hour orphans, and there must be some reminiscence of that within the Pallister government.”

Laura Burla said childcare centres like St. James Montessori deserve the ENG because they do so much more than simply care for children. Centres will help women get out of an abusive relationship, counsel them through other traumas, help through loss or sickness in the family, and on.

“The [parent/child coalition] community was pretty life-changing. It’s the reason I got back in school,” Rempel said. “I was able to get myself out of a tough life situation and turn it around.”

On August 20, Childcare Is Essential held a rally outside the Minister of Families Heather Stefanson’s office with 150 people each meant to represent 150 families affected by the lack of response from the government.

“We don’t say things like: ‘In order to have a healthcare system, only sick people pay. Only parents of school-age children should pay for schools. Only victims of crime should pay for the police or only people whose houses burn down should pay for the fire department,’” Prentice said. “We share these costs collectively.”

Defunding childcare is a slippery slope.