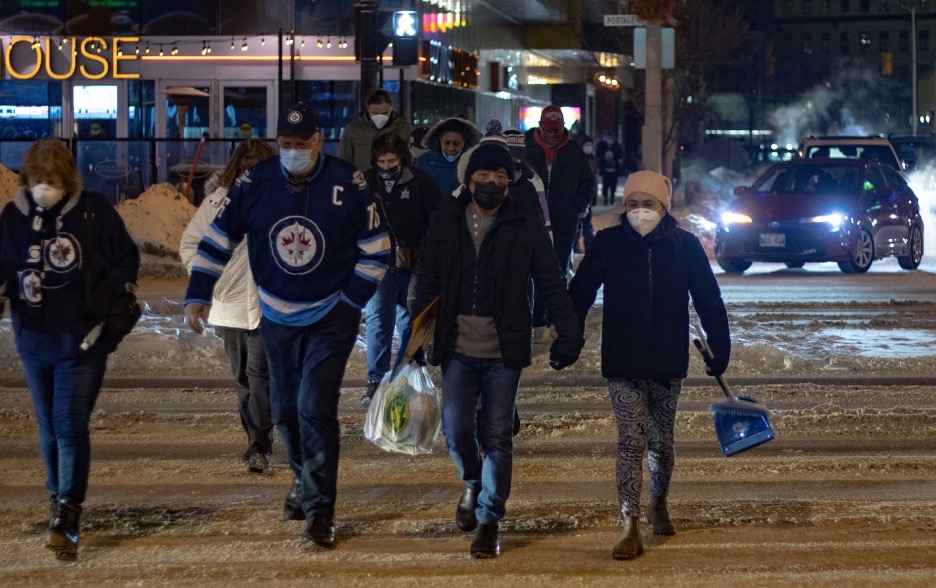 After surviving most of an arduous winter, owing to frigid temperatures and public health orders that limit where and when people can go out, a step toward returning to normal has emerged, catching many by surprise.

The Province of Manitoba announced Feb. 11, among other loosened restrictions, that downtown’s Canada Life Centre can return to full capacity when hosting events. The new health orders allow sports teams such as the Winnipeg Jets and Manitoba Moose to welcome full crowds to hockey games for the first time in weeks.

Many welcome the loosened restrictions, especially at sporting events.

“I was ready,” said Emma Szarek, an occasional attendee and 24-year-old Business Administration student at RRC Polytech. “I’m actually more excited to go to a game that is at 100 per cent capacity.”

The Winnipeg Jets, like most NHL teams, receive the majority of their revenue from ticket sales.

Szarek, who specializes in marketing, said having fans at games benefits many Winnipeg businesses, not just the Jets organization.

“I’m happy for the restaurants in the area; they’re going to be so busy,” Szarek said.

In December 2021, the province announced new health measures to help prevent the spread of COVID-19, which included a maximum capacity of 250 people at indoor public gatherings. In January, the Jets played a pair of games in front of the small group before restrictions loosened to allow over 7,000 vaccinated fans to attend the first two games in February.

The new mandates currently allow venues to operate at full capacity, so long as everyone is vaccinated. Beginning March 1, proof of vaccination will no longer be required by public health orders.

Despite the excitement of some, others are weary of the move to full crowds at sporting events.

Keagan Lilley, a former University of Winnipeg student who is studying to take her Medical College Admission Test, said she worries that COVID-19 case counts are still too high to welcome over 15,000 people to Canada Life Centre.

Lilley said the province should have kept the limits in place a little longer, especially while hospital admissions continue to stress the healthcare system.

“The province is doing next to nothing to keep us safe at this point,” Lilley said.

Lilley said the least it could do is prevent thousands of people from gathering indoors together.

While Lilley said she doesn’t go to many games under normal circumstances, she wouldn’t feel comfortable inside Canada Life Centre.

With the March 1 proof of vaccination lift looming, True North Sports + Entertainment have yet to announce whether it will keep vaccination requirements for fans or follow the province’s direction to remove all restrictions.