RRCSA president reflects on past year

Benjamin McDonald will soon be transitioning into a new position at NDC. THE PROJECTOR/ Courtney Bannatyne

Benjamin McDonald looks to his left at three words on his wall: mission, vision and values.

“Every single office has a copy of our mission, vision, values,” said McDonald, the 2015-16 RRCSA president. “Every decision we make in this office, we look at that and say, ‘Okay, does this improve the students’ experience?’”

The bookshelves of McDonald’s office are nearly empty, and his bulletin board no longer holds papers. Posters cover his desk. After this month’s students’ association election and his graduation, McDonald will leave his position.

“This has been the best job that I’ve ever had.”

McDonald said the RRCSA has accomplished a lot this year but needs to work on its branding. He said many students don’t know what the students’ association does for them.

“Somebody will be eating lunch outside of the Grab N Go, and they’re sitting on those green chairs. They’re eating, and they’re like, ‘The students’ association doesn’t do anything for me,’” McDonald said. “I’m like, ‘You’re sitting on our furniture right now.’”

Mconald said the RRCSA will eventually do a campaign so students know what they do. But he said student awareness of the students’ associations’ role isn’t the most important thing.

“For right now, it’s more than that,” McDonald said. “Whether they know it’s us or not, they’re getting those services.”

He said the RRCSA introduced new events and programs this year, but he said next year’s executives will need to find more efficient ways to do the activities.

McDonald said the RRCSA organized a screening of “Avengers: Age of Ultron” at the Cube in Old Market Square during September’s orientation week. He said the students’ association invited RRC students to bring a lawn chair, eat free popcorn and enjoy a movie. Five students showed up, McDonald said.

“It was so disappointing because it was this really awesome event we had planned,” he said. “We tried something new, but I will not count that as a failure or in any way bad.”

McDonald said a man living in Old Market Square showed up and asked to watch the movie with them. The students’ association told him of course he could and gave him popcorn, McDonald said.

After the movie, the man came up to McDonald and told him he was going to buy drugs with his last $20 but changed his mind because of the students’ associations’ kindness.

McDonald said the man told him it was the first movie he had seen in years and he was happy to be treated like a person.

“There’s a different type of success, which is just knowing that you’re helping people and that you’re giving back in some way,” McDonald said. “And how could you be mad about that?”

McDonald said the past year has been successful for him and his team. He said the RRCSA started the Get Out The Vote campaign for the federal election, started the student refugee program and put on a weeklong event in support of mental health.

“I feel like the one that had the biggest impact was our mental health week,” McDonald said. “Whether it was coming and seeing some of the lectures and guest speakers, or coming out and petting dogs or doing colouring books, students were engaged and involved and talking about mental health issues.”

McDonald isn’t moving too far, though. He got a job in the human resources department on the fourth floor of the Notre Dame Campus. He said he’s happy he can check in on the new executives whenever he wants. 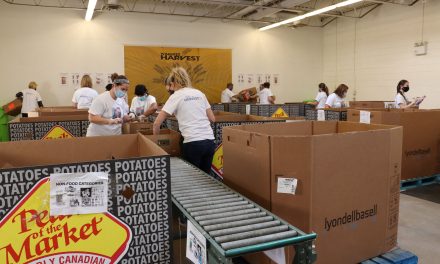