Kristina and Sarah Friesen have travelled to a few different conventions across Canada.
They came to C4 dressed as Jedi from Star Wars. THE PROJECTOR/ Jason Dueck

Halloween wasn’t the only reason to dress up on Oct. 31 this year.

Around 40,000 people visited the RBC Convention Centre over Halloween weekend to participate in the 2015 Central Canada Comic Con (C4). The pop culture expo celebrates everything nerdy from comic books to popular television shows and movies. Attendees paid homage to nerd culture by dressing up as their favourite superhero, videogame character or movie idol.

While there were plenty of DC Comics and Marvel Comics characters exploring the Convention Centre, one franchise really stole the show.

Fresh off the final release for the latest Star Wars movie, fans got to experience a question and answer period with Pablo Hidalgo.

Hidalgo is a former Red River College student who works at Lucasfilm, the studio behind Star Wars. Hidalgo talked about his role in the franchise.

Hidalgo wasn’t the only attraction at C4 for Star Wars fans. River City Jedi showed their LED-saber training skills during demonstrations. The group meets every week at Red River College to practice their martial arts skills with the lightsabers. 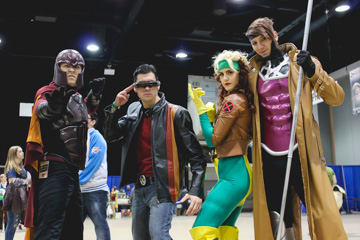 One of the biggest attractions at C4 Winnipeg is seeing people cosplaying as characters from movies or comic books. This group came as their favourite X-Men (from left to right) Magneto, Cyclops, Rouge and Gambit. THE PROJECTOR/ Jason Dueck

Jaime Normand is one of the instructors and said the course is set up to teach people how to safely use the techniques in sparring or combat.

“In the Star Wars universe there are seven different styles of lightsaber fighting,” said Normand. “They’re all based on real-world fighting styles like judo or fencing, so that’s where we start.”

Other big-time celebrities who made an appearance included James Marsters from Buffy the Vampire Slayer and Gates McFadden from Star Trek: The Next Generation.

C4’s next event at the RBC Convention Centre is the St. Valentine’s Horror Con on Feb. 13 and 14. The event celebrates horror movies and the culture around them.

That one might be a bit scary, but there are no age restrictions to C4. That means it’s pretty common to see kids and their parents walking the floor together, often in costume. Some chose to portray individual characters while others chose to create group costumes.

Derek Lees dressed as Captain America, with a group including Dr. Strange, Magneto and Ant-Man. It was his third year at C4 with a group costume and he said he loves the experience he gets from conventions like these.

“We expect to be here for about an hour just taking pictures with people,” said Lees. “But that’s where all the fun is.” 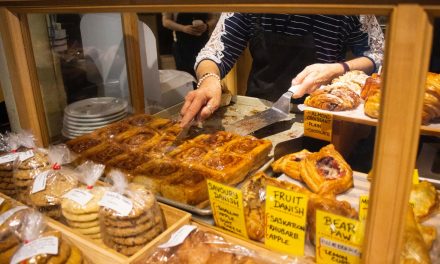