All eyes on as Goldeyes take gold

Baseball fans in Winnipeg made a statement about their loyalty this post-season.

The Winnipeg Goldeyes won their third championship in franchise history on Sept. 19 and the fans were with the team every step of the way.

Games 1 and 2 of the championship series in Winnipeg drew roughly 3,500 fans per game. The decisive Game 5 of the series in Wichita was played out in front of 1,013 fans.

Goldeyes manager Rick Forney, who has been with the team for 20 years, appreciated the support his team received from the fanbase throughout the playoff run.

“They seem to always support us in the postseason,” said Forney. “Believe me, it makes a difference and the players love it.”

Don Soussiseau has been coming to Goldeyes games for years. He admits the team isn’t as popular as the Winnipeg Jets or Winnipeg Blue Bombers, but he believes there are still a lot of loyal Goldeyes fans in the city.

“When I come to games, I see a lot of familiar faces. It’s really cool,” he said.

Some fans would like the team to get more attention. Laurie Desrochers has been scanning people’s tickets at Goldeyes games for two seasons. She referred to working for the Goldeyes as “the best job ever.”

Desrochers was disappointed that the games in Wichita during the finals weren’t aired on TV. Desrochers, along with other Goldeyes fans, was forced to watch the games online.

“I had to watch one of the playoff games on Twitter. It was the most frustrating thing ever,” she said.

Games 1 and 2 of the series were memorable nights at Shaw Park. The ballpark was filled with fans sporting Goldeyes jerseys and hats. The fans were loud from the opening pitch of the first game. They cheered for nearly every play made by the home team. Even after a disappointing 9-2 loss in Game 2, the fans broke into a “Let’s go Goldeyes!” chant as the team left the field.

Goldeyes fan Francis Park has a mini pack of season tickets. He credits the ballpark and the quality of baseball as big reasons why the team has so many supportive fans that keep coming back.

“It’s always been really good baseball. The players give 100 per cent every time they come to the ballpark, and the fans definitely notice. I just love the ballpark and the great location,” said Park.

The 2016 season proved that not only are the Winnipeg Goldeyes the league’s champions, but that they also have championship-calibre fans. 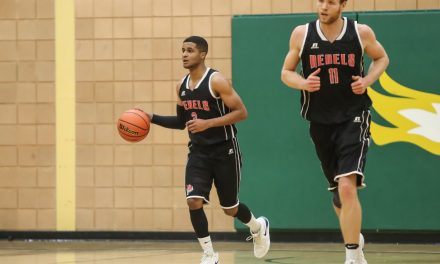 Rebels star on and off the court