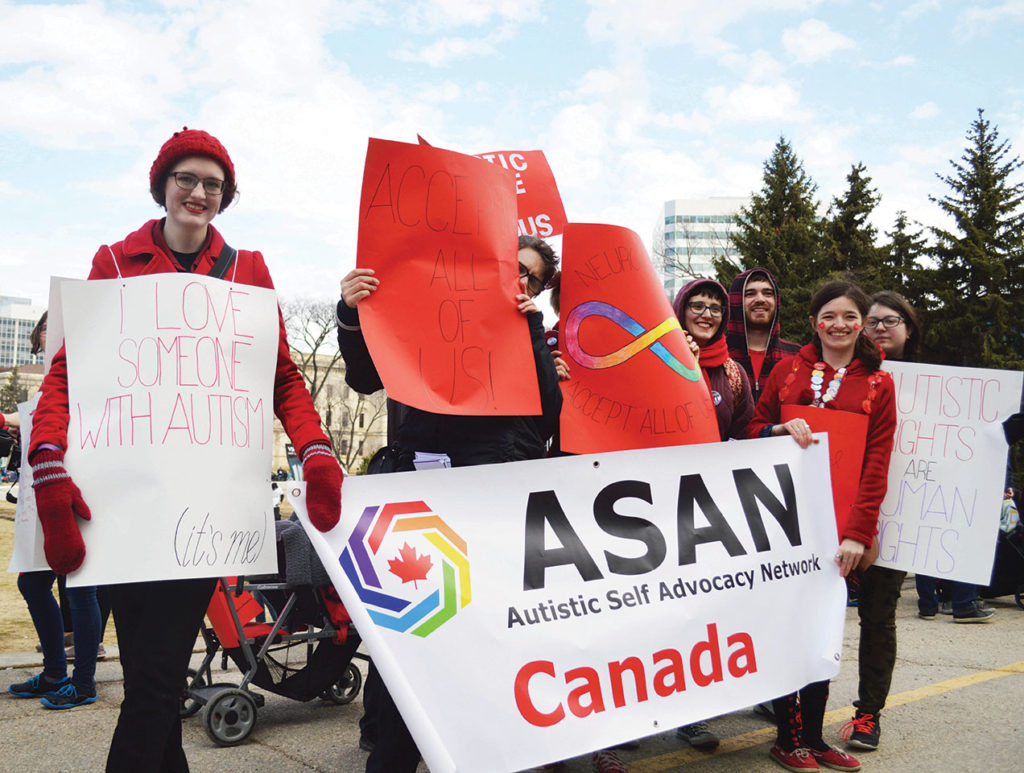 Members of the Autistic Self-Advocacy Network marched at the Leg on April 2. THEPROJECTOR/Keila DePape

People with autism have agency — that’s the message Baden Franz advocated for at the legislative building on April 2.

Dressed in red, Franz and a handful of members of the Autistic Self-Advocacy Network (ASAN) stood out against a sea of blue-clad people gathered for the march organized by Parents of Autistic Children Everywhere (PACE).

“Most decisions made around autism polices—therapy, education etc., are made without any input from the people who are most profoundly affected by them,” said Franz. “We’re working to change that.”

Blue is the colour typically associated with Autism Awareness Day and the puzzle piece icon of the organization Autism Speaks.

“We don’t want to protest [the march], but it’s happening in ways we don’t agree with,” said Franz, 21, who was disappointed that organizers declined to have an autistic keynote speaker.

ASAN doesn’t support Autism Speaks because of what they see as promoting a negative representation of autism by focusing on cures and prenatal testing, rather than on helping people living with autism.

“It leads to stigma about autism being a terrible tragedy, and it’s not,” said Franz, a women and gender studies major at The University of Winnipeg.

Franz believes focus should be on acceptance and accessibility, including breaking down barriers facing students with disabilities.

One of those barriers, said Franz, is getting the formal diagnosis documents required to access disability services at her university.

Services at the university include extra time for exams, help with note taking, and individual environments for exam taking.

The same documents are required to access services at Red River College, which are highly individualized to the student’s disability and the course objectives, according to the college’s website.

Franz funded her own autism assessment a few years ago, costing her several thousand dollars.

“It wasn’t fully covered by insurance, and a lot of it was out of pocket,” said Franz.

About 1 in 68 children is diagnosed with autism spectrum disorder (ASD) according to the Autism and Developmental Disabilities Monitoring Network.

“Provincial funding for diagnosis really drops off once you reach 5 or 6, and if you go the private route, it’s very expensive,” said Franz.

For educational supports, provincial funding ends at the age of 21.

That age limit doesn’t match the reality for many autistic students, according to Heather Milne, an instructor in RRC’s 2014 pilot project for students with intellectual disabilities.

“It takes longer [for autistic people] to find their strengths and skills,” said Milne, whose son has autism.

Many also need more time to finish their education— 65 percent of people with developmental disabilities took longer to achieve their education, according to a 2012 Statistics Canada report.

RRC’s Transforming Futures Project was a two-year project and the first of its kind in Manitoba. With the program, students with intellectual disabilities explored career options, learned skills for finding employment, and had the option to purse an RRC certificate.

However, the culinary arts and administrative assistant programs were the only two options, but for future projects, Milne believes “students should be able to choose their course of study as opposed to only certain programs.”

The college has not yet released the project’s evaluation report.