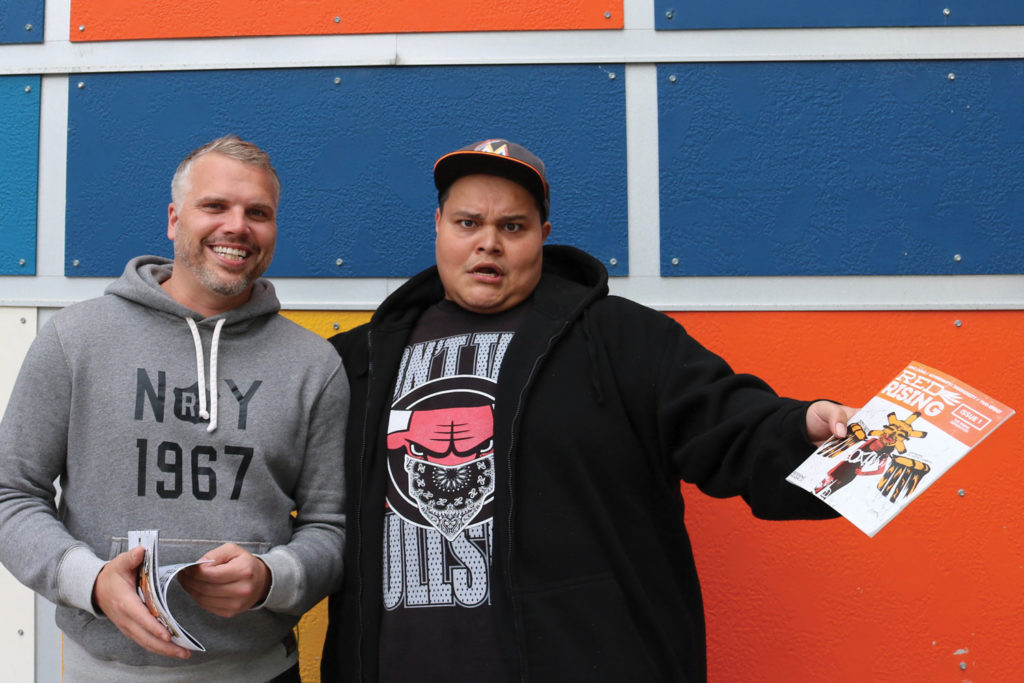 Ben Walker and Paul Rabliauskas joke around in front of the West End Cultural Centre where ‘Laughter is Medicine’ will take place Sept. 22. THE PROJECTOR/ Kit Muir

Red Rising Magazine, a collective of Indigenous youth and non-Indigenous allies, is organizing the comedy night fundraiser Laughter is Medicine on Sept. 22 at the West End Cultural Centre. The event will feature five Indigenous comedians, including Rabliauskas as the headliner, with non-Indigenous host Ben Walker.

Red Rising Magazine’s content is based on current issues affecting Indigenous communities. A comedy night may not seem like the most appropriate way to speak about these issues, but Rabliauskas said that comedy is an important part of being Indigenous.

“We have lost a lot. We’ve lost culture, we’ve lost languages, we’ve lost where we live, we’re losing our drinking water,” he said. “But the one thing that has stayed intact is our sense of humour.”

Ashley Richard, co-founder of Red Rising Magazine and organizer of the comedy night, also sees the value in comedy.

“Laughter can heal and laughter brings joy. The ability to create laughter is a gift and we want to share these comedians’ gifts with our community,” she said.

Richard said she would like to see anyone and everyone come out to this event.

“It’s important for us to make sure that our events are accessible to everyone,” she said. “Red Rising is about fostering strength and resiliency in our people, which includes inclusiveness.”

The comedy night, like all of Red Rising Magazine’s events, is donation based. The recommended donation for a ticket is $15.

The money raised at this event will go toward publishing Red Rising Magazine’s fourth issue with a launch in Vancouver.

“Right from the beginning, we had dreams of spreading this movement across the land,” said Richard.

The collective will also spend the money on video equipment that they’ll use to create more diverse content in an effort to share their ideas with a wider audience.

Tickets for Laughter is Medicine can be purchased in advance at Red Rising Magazine’s website.